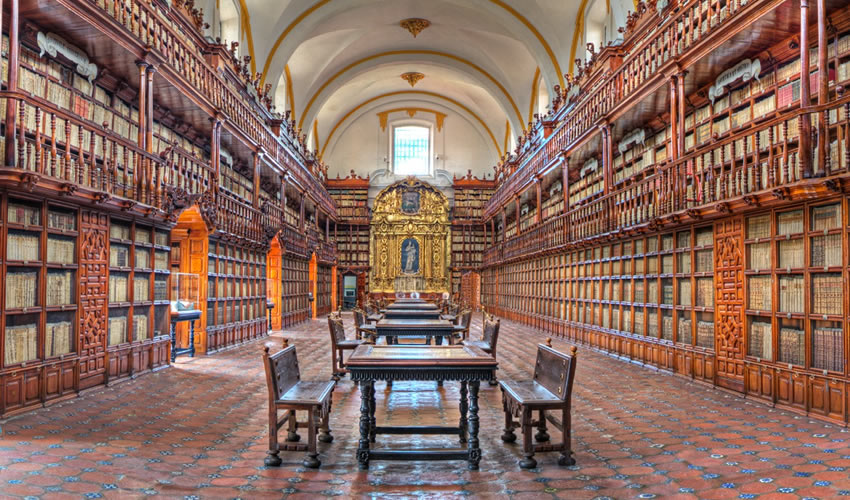 The Biblioteca Palafoxiana is a library in Puebla City’s historic center, in the Mexican state of Puebla. Founded in 1646, it is recognized by UNESCO for being the first and oldest public library in the Americas.

For more than 370 years, the Palafoxiana Library has been located in the Old College of San Juan within the Seminary founded by Palafox and Mendoza. It has more than 45,000 books and manuscripts, ranging from the 15th to the 20th century.

In 2005, it was listed on UNESCO’s Memory of the World Register.

On September 5, 1646, bishop Palafox y Mendoza donated his personal library, made up of 5000 volumes to the Colegio de San Juan—which was founded by him—on the condition that they are made available to the general public.

He wrote that “it is very useful and convenient that there should be in this city and kingdom a public library, where all sorts of people will be able to study as they wish”.

Since then, it has been established in the former Colegio de San Juan, in the heart of the city of Puebla, and is considered the first public library in the Americas. The library since its inception has been used by persons who wish to study.

The creation of this library was approved by royal decree in December 1647 and reconfirmed by Pope Innocent X in 1648.

More than a century later, Francisco Fabián y Fuero ordered the construction of the premises which currently house the Biblioteca Palafoxiana. He donated his own collection.

Later, the collections of the bishops Manuel Fernández de Santa Cruz and Francisco Pablo Vázquez and the dean of the Francisco Irigoyen Cathedral were gradually added, as were volumes from Pueblan religious schools and individuals.

Books confiscated from Jesuits upon their expulsion in 1767 were also added.

The library was finished in 1773, consisting of a 43-meter-long vaulted hall on the Colegio’s second floor. Two levels of bookshelves were built, and a retablo of the Madonna of Trapani by Nino Pisano was acquired.

By the mid-19th century, the size of the collection necessitated the third level of bookshelves.

The Biblioteca Palafoxiana has more than 45,000 books and manuscripts, ranging from the 15th to the 20th century.

The library has three major collections: old books, manuscripts, pamphlets, and broadsheets. It also has nine incunabula. The oldest text in the library is the Nuremberg Chronicle dated 1493.

The Palafoxiana Library was named in 1981, the Historical Monument of Mexico for its beautiful enclosure, emblematic of the Novohispanic baroque.

Two earthquakes in 1999 caused damage to the building and shelves, leading to a restoration program in 2001.

In 2005, the library was included by UNESCO as part of the Memory of the World program for its bibliographic heritage of ancient background.

Today, it houses the Institute for Bibliographical Research which has been in charge of publishing “Los Impresos de la Biblioteca Palafoxiana”(“The Prints of the Palafoxiana Library“) promoting the historical value of the collections and its museum.

Palafoxiana Library is a book museum and continues its work as a universal library. In addition, it has a Ludic Room to promote book arts among children.