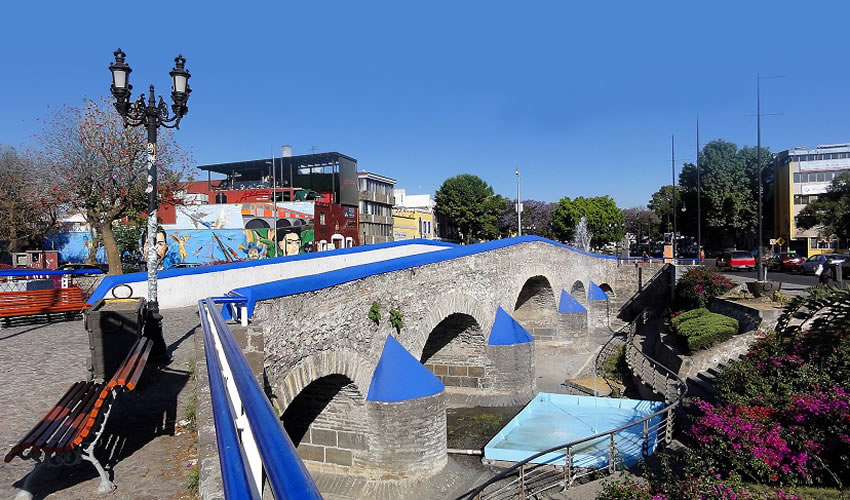 During the colonial era, Puebla was one of the most important cities in New Spain and the entire continent. Puebla still has many examples of architecture with their own story.

The Ovando Bridge is a small bridge, located in the Analco neighborhood. This stone bridge was built around 1775, to replace the old Analco Bridge that was used to connect the Spanish settlements with the downtown area of Puebla. It was one of the main bridges standing at the time (there were around 15).

To gather the money for its construction, a special bullfight was organized. This kind of event was popular at that time and people gathered at the Zocalo downtown.

The Ovando bridge was located immediately to the house of the councilor Agustín de Ovando y Villavicencio, ergo his name.

Today the Ovando Bridge is one of the icons of Puebla. The place is full of tradition, culture, gastronomy, and crafts. A comfortable place for a morning walk.

However, the Ovando Bridge is also one of the structures in Puebla that is surrounded by legend. In this case, there is a story completely separate from the facts, but it is still very interesting to know. It is a love story, similar to William Shakespeare’s Romeo and Juliet, where there is simply impossible love.

The legend of the Ovando Bridge

Legend has it that the Ovando family, one of the wealthiest in Puebla, had the Ovando Bridge built. Thus, they could link their luxurious home with the rest of the city by crossing over the San Francisco River.

Supposedly, the patriarch of the family had two children: a strong young man and a young, beautiful 16-year-old daughter, who fell in love with a middle-class young man.

It was a time when the family name of ancestry and maintaining prestige were everything for wealthy families.

Disconsolate at the attitude of her father, the young woman cried for the love she felt towards the young man from Puebla and thought about how to remedy the situation.

She thought that if she lost her virginity, her father would have no choice but to accept this loving union. However, on the day this event occurred, her brother caught them in the act.

Enraged, he drew his pistol and tried to shoot the young man, only for her to step in his way, taking the bullet. Trying to avenge his beloved, the middle-class youth tried to reach for her sword. But, the brother was faster and cut the throat of his rival with a knife.

The brother was not prosecuted or sent to jail because he committed an “honor killing.” That did not prevent his death, because a short time later he was found lying in an alley. It is said that the father, due to both tragedies, gave himself up to drink.

One day, at dawn, he went to the Ovando Bridge and there a woman approached him. She turned out to be the spirit of her daughter, which scared him and he tried to run away.

Horrified, the nobleman Ovando tried to escape, repeatedly denying himself what he had just seen, but an inexplicable flood of the river trapped him and his body was found dead several days later.

Much time later, it was still said among the locals that this same silhouette would walk through the Ovando Bridge at midnight and if one gave alms, they could pass freely; but if not, the same end of the patriarch ran.

It is said that the spirit of a woman still can be seen on the bridge. Or, at least, that’s what the legend says.

The Ovando bridge on Google Maps