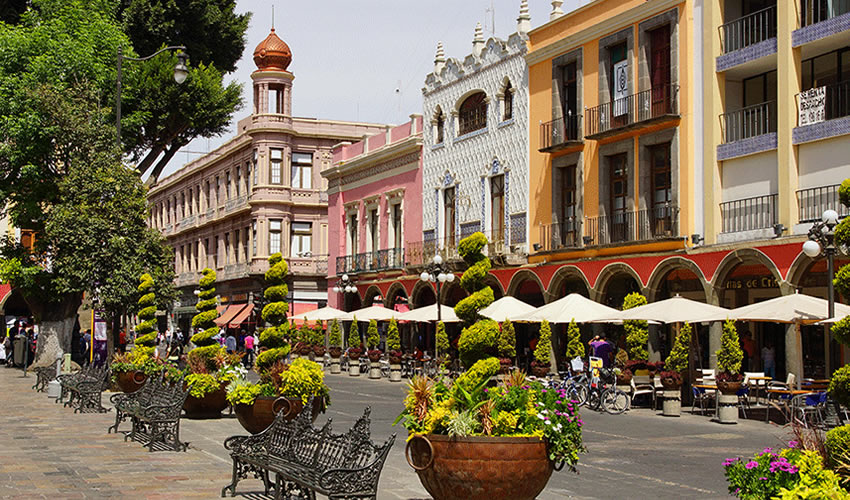 Best things to do in Puebla

Puebla is one of the most popular tourist destinations in Mexico. Puebla is only two hours drive from Mexico City, so it is a convenient stop on travelers’ itineraries, and it is a beautiful colonial city from the 16th century with many highlights such as colorful architecture, churches, and surrounding volcanoes.

Mexico is not only about beaches and Mayan ruins as some might think. Mexico is also a country with an incredible number of cities with an interesting history, beautiful architecture, colorful streets, lively markets, and great street food.

And Puebla, only two hours away from CDMX is one of those cities. Plus it has one more ace in the sleeve. Towering volcanoes nearby.

Puebla is a UNESCO World Heritage city, so you might think we should not have been surprised that the place has to offer so many things to do. Puebla combines the bustle of a large and modern thriving city with the history and splendid architecture, and when walking in the center, you’ll have a feeling you were set a couple of centuries back.

In this travel guide, we’ve picked the best activities you can do in Puebla.

What to do in Puebla?

Puebla is a culinary city, but apart from eating you should focus on architecture, museums and markets the city has aplenty. When you have enough time, consider including a trip to volcanoes in your itinerary.

Here’s a list of the must-see places in Puebla.

Zocalo: Every city center in Mexico is called Zocalo, and Puebla also has its Zocalo, a place with the biggest concentration of people (including tourists) and architectural gems.

The central plaza is lined with Renaissance and Baroque Puebla’s Cathedral, City Hall, colonial houses, and many restaurants in the arcades.

Templo de San Francisco: We caught the sight of this church when we were arriving in Puebla’s center by taxi from a bus terminal, and we decided that we must go back to take a photo.

Templo de San Franciso is colorful and so different from other churches you can see in Puebla, that it deserves a couple of minutes of your time.

Museo Amparo: Museo Amparo is, without doubt, the best museum in Puebla, and one of the best museums in Mexico generally. The museum is housed in two colonial buildings, and the most modern part is made of glass where you also can admire the incredible vista and skyline of Puebla when standing on a terrace.

When you are inside the museum, you’ll find yourself deep in Mexico’s history, as the museum contains artifacts from 2500 BC until the most recent times.

If Puebla is the second stop on your Mexico trip right after Mexico City, and you did not see many ruins apart from Teotihuacan, we recommend you to take time and explore Museo Amparo thoroughly.

This way, you can learn more about all those cultures who lived in Mexico during pre-Hispanic times. This will help you also later when exploring places such as Monte Alban near Oaxaca.

Of course, Puebla has much more worthwhile museums, but if you are here only for a day or two, this place is a must-visit.

Volcanoes: Why not go and explore some volcanoes while in Puebla. The city is close to two famous volcanoes Iztaccihuatl and Popocatepetl, and you can take a tour from the city, to see those two towering snowcapped giants up close.

Most of the tours include only walking in the park around the volcanoes, but if you feel more adventurous, you can sign up and climb Iztaccihuatl, the more famous Popocatepetl is off-limits to visitors because of volcanic activity.

Estrella de Puebla: One of the largest ferris wheels is to be found in Puebla. The 20-minute ride will allow you to see the city from every angle possible, and it is the top thing to do in case you need to spice up the classic sightseeing a bit.

The views from the observation wheel are amazing, and if you are not limited by time, plan your visit around the sunset, when the city lights up.

The Rosary Chapel inside the church is one of the most opulently decorated chapels we’ve ever seen, and when standing inside, we could not decide whether the thing we see is pretty, or it is already too much.

Either way, the baroque Capilla del Rosario is a must-see place when in Puebla.

Cholula: A small village Cholula is only 20 minutes away from Puebla – you can either take a colectivo, taxi, or a tour.

The reason why travelers flock in here is that Cholula is the oldest still-inhabited town in the Americas.

Here, you can find the largest pyramid in the world (the Tlachihualtepetl is mostly covered by vegetation, so it looks more like a hill).

On the top of the pyramid stands Iglesia de la Virgen de Los Remedios, and you can enjoy wonderful views of the Popocatepetl volcano.

Biblioteca Palafoxiana: The interior of Library Palafoxiana is a real treat for the eyes. The library was established in 1646, and therefore it is one of the oldest libraries in the Americas.

Visiting the library is one of the best budget-friendly things to do in Puebla, as the entrance is free.

Xanenetla: If you want to explore Puebla outside the historic center, and want to see one of many neighborhoods and something a bit different than colonial houses, one of the best tips we can give you is to explore Xanenetla barrio.

The neighborhood reminded us a bit of Valparaiso in Chile as it is known for street art and many open-minded and artsy people live and create their art here.

The place is not considered unsafe as it used to be in the past, but it is still better to visit this area during daylight.

Calle de Los Dulces: Sweet Street is a place no one who loves any kind of sweets should miss. Calle de Los Dulces is right in the city center on Avenida 6 Oriente, and you will find here many stalls and tens of sellers waiting to satisfy your sweet tooth.

Museum of the Baroque: The building of the Baroque Museum has wonderful clean lines, and it almost seems that it does not belong here to Puebla. Japanese architect Toyo Ito designed the museum, and even if you do not plan on going inside, it is a worthwhile place to see from the outside.

Fuertes de Loreto y Guadalupe: Two forts on the top of the Acueyametepec hill, fort Loreto and fort Guadalupe were built to defend Puebla in the 19th century against French invaders.

You can stroll around the complex and imagine how it must have looked like here centuries ago. The view from the hill is also not that bad at all.

Parian Market: This market is not yet another random market you come across in almost every city. Parian Market is a place where you can buy authentically produced Talavera ceramics, so it is a great market in case you want to bring home some traditional and original souvenirs.

Casa de Los Muñecos: Close to Zocalo, you cannot miss the fine sight of the 18th-century baroque house with the wonderfully tiled facade.

Cantona: Cantona was a prominent Mesoamerican walled and fortified city between 600 and 1000 AD set in a beautiful landscape. Nowadays, this archeological site is a hidden gem that you can visit on a day trip from Puebla.

More than 25 ballcourts have been discovered yet, and it’s been said only between 1-10 percent of the city was uncovered, so it would be definitely worth it to come back in the future to see the progress and the real grandeur of the place.

Mole Poblano: When talking about the food, Puebla is one of the culinary centers of Mexico, so skip fast foods and try the traditional meals instead.

The signature meal you should try in Puebla is mole poblano (chilly-chocolate thick sauce usually served with meat and rice), which is even named after the city. Puebla has a large network of street food.

Where to stay in Puebla?

As Puebla is so close to CDMX, it is a traditional stop on almost every traveler’s itinerary, and it is the first place where visitors can get a sense of Mexican colonial cities.

Puebla is also a popular weekend gateway for locals from Mexico, so although the city offers quite a wide range of accommodations, it pays off to make a reservation well in advance.

When to visit Puebla?

Temperatures in Puebla are usually pleasant as they are moderated by the altitude – Puebla sits more than 2000 meters above sea level, so it is rarely too hot here, and it can get a bit chilly in the evening, throughout the night, and early in the morning.

The dry season is from November to April, and the other half of the year can see rain more often, especially later in the afternoon.

Hot to get to Puebla?

Puebla lies only two hours drive from the capital of Mexico, Mexico City, so technically it is its suburb as CDMX is sprawling, and getting to or from Puebla is extremely easy when traveling in this direction.

Puebla is often rated as one of the safest cities in Mexico which still doesn’t mean it is 100% safe, but you can walk around the historic center during daylight without an uneasy feeling.

Of course, Puebla is still a large, cosmopolitan city, so you should watch your belongings all the time, but we never had a feeling we should be more careful than we normally are when traveling.

As usual, use your common sense, do not wander away from the center after dark, and do not show off your valuables. In case you will follow those simple rules, your visit to Puebla should be safe.