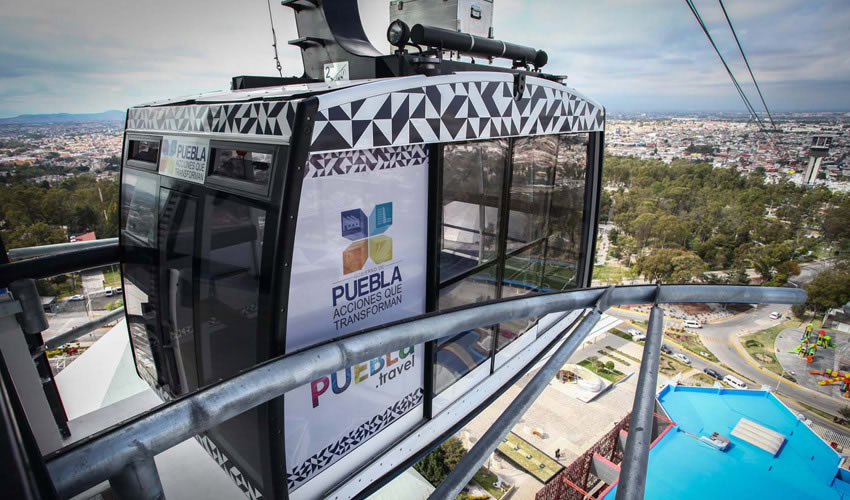 The Puebla Cable Car is a tourist attraction in the city of Puebla. It is located in the area of ​​the Forts, communicating the Exhibitor Center, whose station is 58 meters high, with the monument to Zaragoza, where the station is 48 meters above the ground.

From the cabins, you can contemplate the largest urban mural in the world, a panoramic view of the city, as well as the Popocatépetl and Iztaccíhuatl volcanoes. Besides the forts, other attractions in the vicinity are the Paseo del Teleferico Park, the planetarium, and the Museum of Evolution.

The cable car has two gondolas that provide service to a maximum of 35 people per cabin, with a travel time of between three and five minutes.

The inauguration of this transport system brought with it some criticism in the national media. In addition to exceeding the budgeted amount by 116%, it was widely criticized for the delay in the work, whose delivery date was changed four times, adding at the end three years more than what was provided.

Originally, the project comprised a length of almost 2 kilometers, which would connect the Exhibitor Center, in the Los Fuertes area, with the Historic Center.

In 2013, after the demolition of the Casa del Torno, a listed construction from the 17th century, the work was suspended after a judge ordered the suspension of the work in the Artist’s Quarter since the corresponding permits from the National Institute of Anthropology and History were not available.