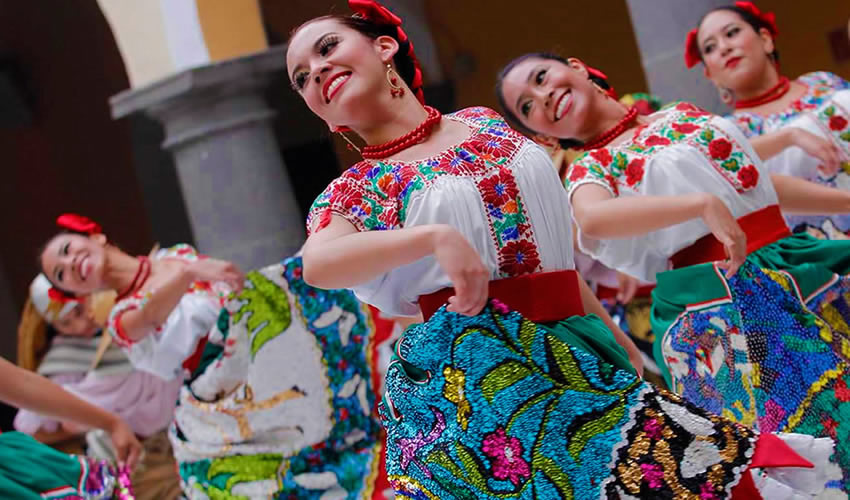 Catarina de San Juan known as the China Poblana was a slave that, according to legend, belonged to a noble family from India. She was brought to Mexico through the Spanish East Indies (Philippines) and has been credited since the Porfiriato with creating the China Poblana dress.

After converting to Catholicism in Cochin —an Indian city where she was kidnapped by Portuguese pirates—, Mirra was given the Christian name Catarina de San Juan, the name she was known as in Angelópolis where she worked as a slave, got married, and eventually became a beata – a religious woman who took personal religious vows without entering a convent.

Upon her death, Catarina de San Juan was buried in the sacristy of the Templo de la Compañía de Jesús in Puebla, in what is popularly known as Tumba de la China Poblana or Tomb of the Chinese Pueblan.

In Hispanic cultures at the time, it was common to use the term chino to refer to all persons of Asian descent, regardless of actual ethnicity.

What is known about the life of Catarina de San Juan is from published 17th-century texts.

According to these sources, a young Indian woman was brought from the Philippines by a merchant ship to be the viceroy’s personal servant.

This girl, named Mirra, was kidnapped by Portuguese pirates and taken to Cochin (modern-day Kochi), in the south of India. There, she escaped her kidnappers and took refuge in a Jesuit mission, where she was baptized with the name Catarina de San Juan.

Mirra was then delivered to Manila where she was purchased as a slave by a merchant who later took her to New Spain.

But once they disembarked in the port of Acapulco, instead of delivering her to the Marquis, the merchant sold her as a slave to the Pueblan man Miguel de Sosa for ten times the price that the viceroy had promised for her.

Catarina de San Juan, or Mirra (or Mira/Meera), followed the style of dress of her birth country, India, completely wrapped in a sari that covered her whole body. She could have worn the Langa Voni which consists of a blouse and a petticoat. It is possible that this mode of the dress gave rise to the china dress.

A few years after her arrival in Mexico, Miguel de Sosa died, providing in his will for the manumission of his slave.

She was taken in by a convent, where it is said she began to have visions of the Virgin Mary and Baby Jesus.

In Puebla de Los Ángeles she was venerated as a popular saint until 1691 when the Holy Inquisition prohibited open devotion to her.

Today, the former Jesuit church, the Templo de la Compañía, in Puebla, is known as La Tumba de la China Poblana because in its sacristy lie the remains of Catarina de San Juan.