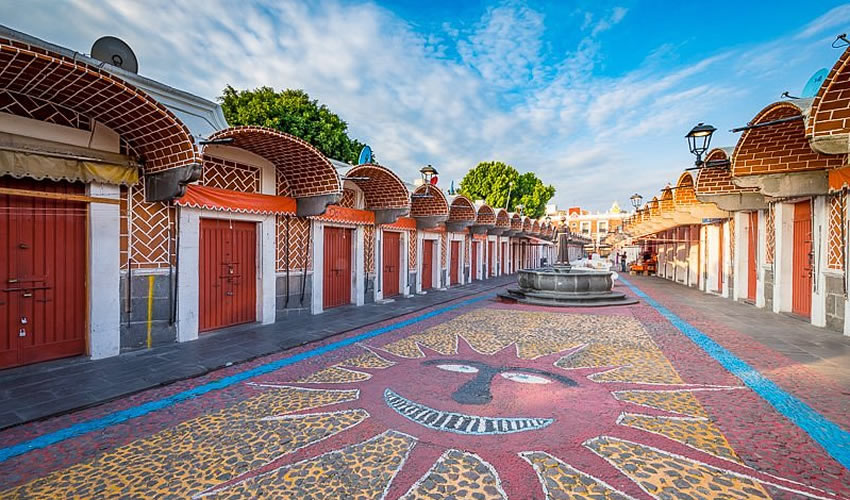 El Parián is Puebla’s largest traditional handcraft market. It is one of the most-visited tourist attractions of Puebla City.

Located on the southeastern corner of Puebla’s historic center, El Parián market is surrounded by Barrio del Artista (“Neighborhood of the Artist”). The streets outside the market proper are filled with galleries and artists selling on the street. Most of its buildings are made of brick with Talavera tile accents very typical of Puebla traditional architecture, and its streets are paved in stone.

Currently, it has 112 stores decorated with bricks and tiles from Talavera and you can find all kinds of traditional crafts from a few regions. These include various kinds of pottery, regional and traditional clothing, leather goods, wood items, jewelry, and copper work. Handcrafts from Puebla state dominate, including Talavera pottery, silver from Amozoc, amate paper from Pahuatlán, and traditional candies such as camotes.

Another of the attractions of the Parián are the cartoonists, who, through a photo or in-person and at the moment, create pencil cartoons, in different sizes and at a fairly accessible price.

Nearby you can find other services to complement the visit, such as restaurants, where you can eat dishes from Puebla’s gastronomy.

Some activities in which the market participates – an “offering corridor” is organized that passes through the market, in addition to other historical points of the city of Puebla. It is worth mentioning that this market is among the most visited by tourists.

The market was built in 1801 in the old Plazuela de San Roque.

The buildings originally were always a market, called El Parian, which opened in 1760 and operated until the end of the 19th century.

It is considered the first artisan market in the city, beginning its activities from the year 1760 until the appearance of the railroad, becoming a center of cargo and retail trade of souvenirs and typical fried food stalls receiving the name of Plaza of the Baratillo.

Its demise came with the construction of the railroads, devolving into a flea market and market for cheap goods.

In 1961, the market was revamped to its current use, to move street vendors off the main plaza.

In the market, you can find a variety of crafts and typical sweets from the capital of Puebla, as well as from the cities of Atlixco, Cholula, and Tecali de Herrera.

In the market during the national dates, you can see the premises filled with typical costumes, mainly from China Poblana, in its three versions: simple, medium luxury, and luxury.

The single consists of a few sequins on the front of the skirt where an eagle is drawn. The medium luxury one has the eagle on the front and the Aztec calendar on the back, while the luxury one is completely embroidered with beads and sequins with figures of the eagle and Aztec calendar, as well as a charro and a Chinese from Puebla.