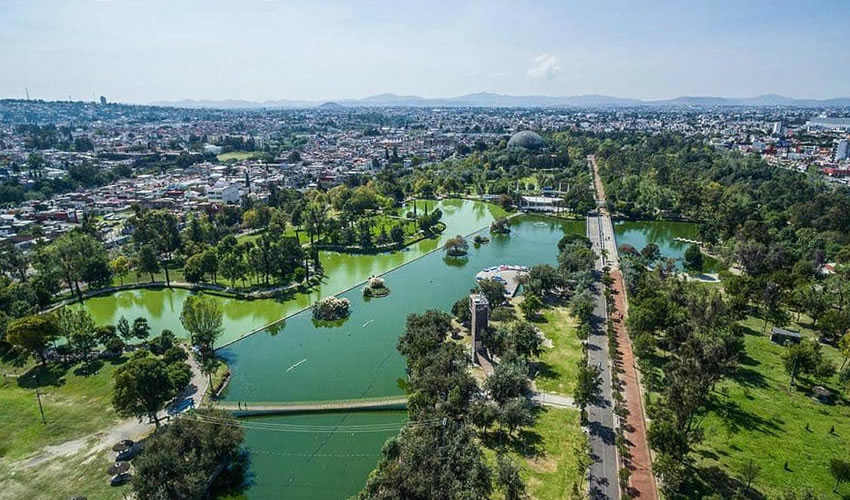 In pine forests, Montezuma pine (Pinus Montezumae) is predominant, with Hartweg pine (Pinus Hartwegii), Teocote pine in dry areas with shallow soils, and fir-tree in various forests together with oyamel (Abies religious). The fauna consists mainly of small mammals such as rabbits and skunks, as well as birds such as owls, vultures, and wild waterfowl.

Metropolitan Eco-park of the City of Puebla: This park is a giant ecological and tourist recreation proposal and also, together with the Amalucan Park, they are the only two eco-parks in Puebla that welcome pets with pleasure. Park is located in the Angelópolis Zone of the city that is directly connected to the Paseo del Río Atoyac.

The Mexican Revolution Ecological Park: It was opened in order to protect, conserve and improve the natural areas of the state and to provide the people of Puebla with spaces for culture, education, sports, and recreation, the Mexican Revolution Ecological Park was set up with 58 hectares. At the beginning of 2015, this park was modernized, which has an influx of one million visitors per year. Previously it was an airfield.

Los Fuertes: In this area, located on the San Cristóbal hill, has several parks and museums, highlighting the Forts of Guadalupe and Loreto (Museum of Non-Intervention), the Ignacio Zaragoza Mausoleum, the Regional Museum of Puebla (INAH), the Monument to the Flag, the Interactive Museum May 5, the Cable Car Walk, the Museum of Evolution and the Planetarium, the Exhibitor Center, the “El Relicario” bullring, the Rafaela Padilla auditorium, etc.

Parque Juárez: Located in the “Golden Zone”, it was one of the first urban parks in the city. It was remodeled in 2018 improving its image.

Amalucan Park: Located on the Amalucan hill, it is a park inaugurated in 2018 that contains archaeological ruins, a statue of “La Victoria” viewpoint, artificial beach, courts, etc …

The urban area of ​​Puebla is located on lands formerly covered by temperate forests and natural and induced grasslands. With the progressive growth of the city, these ecosystems were almost completely eradicated.

The first reforestation efforts included exotic species, especially eucalyptus and pirules, which have a high degree of adaptation and have displaced the native flora.

The main green areas of the city, such as the Amalucan hill, the Los Fuertes area, and the 25 Military Zone, are covered by these species, while only at the eastern end of the city there are remnants of mixed oak and sabino forest. and pine.

Outside of that, the flora of the city is mainly ruderal and ornamental. Among the most visible species are:

Along with the natural spaces, the local fauna has also been seriously affected by the growth of the city.

On the other hand, synanthropic species, which adapt to or even benefit from human presence, have thrived in the area; among them, the black rat (Rattus rattus), the red-bellied squirrel (Sciurus Aureogaster), the cacomixtle (Bassariscus astutus), the opossum (Didelphis virginiana), the rock pigeon (Columba livia), the house sparrow (Passer domesticus) and the carrot (Quiscalus Mexicanus).