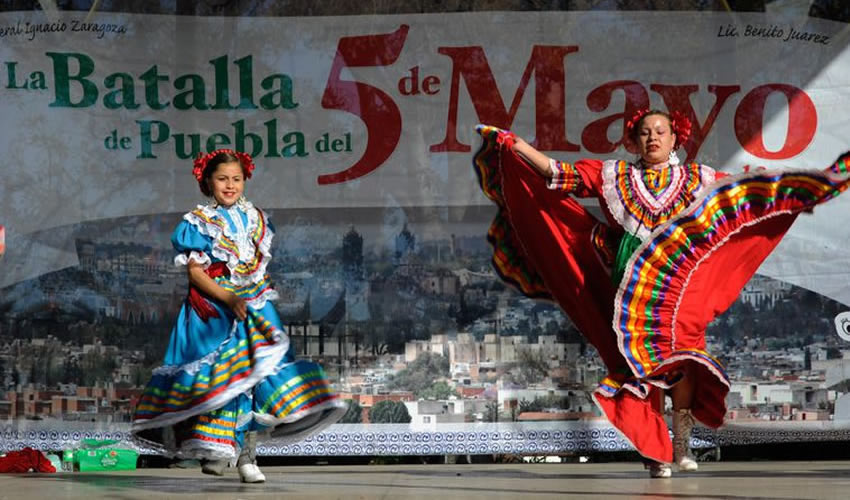 Cinco de Mayo commemorates the 1862 Battle of Puebla between the victorious ragtag Mexican army against the invading French forces of Napoleon III.

Cinco de Mayo (“5th of May”) is an annual celebration. The date is observed to commemorate the Mexican Army’s victory over the French Empire at the Battle of Puebla, on May 5, 1862, under the leadership of General Ignacio Zaragoza.

The victory of the smaller Mexican force against a larger French force was a boost to morale for the Mexicans. This battle was significant in that the 4,000 Mexican soldiers were greatly outnumbered by the well-equipped French army of 8,000 that had not been defeated for almost 50 years.

But a year after the battle, a larger French force defeated Zaragoza at the Second Battle of Puebla, and Mexico City soon fell to the invaders.

Today, the commemoration of the battle is not observed as a national holiday in Mexico (i.e. not a statutory holiday). However, all public schools are closed nationwide in Mexico on May 5. The day is an official holiday in the State of Puebla, where the battle took place, and also a full holiday (no work) in the neighboring State of Veracruz.

The commemoration of the battle continues to be mostly ceremonial, such as through military parades or battle reenactments.

In Mexico City, the military commemoration is occasionally held at the Campo Marte. Thousands of Mexicans celebrate Cinco de Mayo by dancing through the streets of Mexico City and reenacting the historic Battle of Puebla.

The city of Puebla marks the event with an arts festival, a festival of local cuisine, and re-enactments of the battle.

Cinco de Mayo has its roots in the Second French intervention in Mexico, which took place in the aftermath of the 1846–48 Mexican–American War and the 1858–61 Reform War.

The Reform War was a civil war that pitted Liberals (who believed in the separation of church and state, and freedom of religion) against Conservatives (who favored a tight bond between the Catholic Church and the Mexican state).

In 1862, Mexico went bankrupt due to half a century of almost constant conflict and wars. The country could not meet the most pressing needs, so on July 17, 1861, President Benito Juarez issued a decree extending for two years the payment of the external debt to European countries.

In October 1861, France, England, and Spain signed the London Convention and agreed to send soldiers to Mexico to claim creditors for a debt that amounted to about 80 million pesos.

Approximately 69 million were the debt to the British, 9 million to the Spaniards, and 2 million to France. But France refused to negotiate through diplomatic channels on terms under which the debt would be paid later, as the Spanish and British had done in the preliminary treaties of La Soledad.

So Napoleon III, then the ruler of France, decided to invade Mexico in order to establish a monarchy beneficial to France, stock up on raw materials, and in the future extend his imperialism to the United States. To this end, he had to dissolve the Mexican government created by President Benito Juarez.

In April 1862, a well-armed French fleet attacked Veracruz, landing a large French force and driving President Juárez and his government into retreat.

Moving on from Veracruz towards Mexico City, the French army encountered heavy resistance from the Mexicans close to Puebla, at the Mexican forts of Loreto and Guadalupe.

The French army of 8,000 attacked the poorly equipped Mexican army of 4,000. After several attacks, on May 5, 1862, the battle took place on the hill of Loreto, on the top of which stood a chapel built as a fort to protect the city of Puebla.

The victory represented a significant morale boost to the Mexican army and the Mexican people at large and helped establish a sense of national unity and patriotism.

The hero of the first battle of Puebla was General Ignacio Zaragoza, commanding nearly 2,000 soldiers and 2,700 peasants using machetes and spears called “chinacas” made of wood with a metal tip. The French used pistols, metal-tipped carbines, bayonets, and cannons.

The first Mexican victory did not last long. A year later, a 35,000-strong French force succeeded in defeating the Mexican army, and thus France succeeded in taking control of Mexico City and imposing Emperor and Empress of Mexico on the Austrian Maximilian of Habsburg and his wife Carlota.

The French victory was itself short-lived, lasting only three years, from 1864 to 1867. By 1865, with the American Civil War now over, the U.S. began to provide more political and military assistance to Mexico to expel the French.

Upon the conclusion of the American Civil War, Napoleon III, facing persistent Mexican guerilla resistance, the threat of war with Prussia, and the prospect of a serious scrap with the United States retreated from Mexico starting in 1866.

Thus, during the course of 1866, the Republicans gained important positions, until the area of ​​imperial influence was reduced to Puebla and Veracruz.

On April 2, 1867, troops led by Porfirio Diaz took the city of Puebla, with which the empire was destroyed militarily.

The Mexicans recaptured Mexico City, and Maximilian I was apprehended and executed, along with his Mexican generals Miguel Miramón and Tomás Mejía Camacho in Cerro de las Campanas, Querétaro.

On June 5, 1867, Benito Juárez finally entered Mexico City where he installed a new government and reorganized his administration.