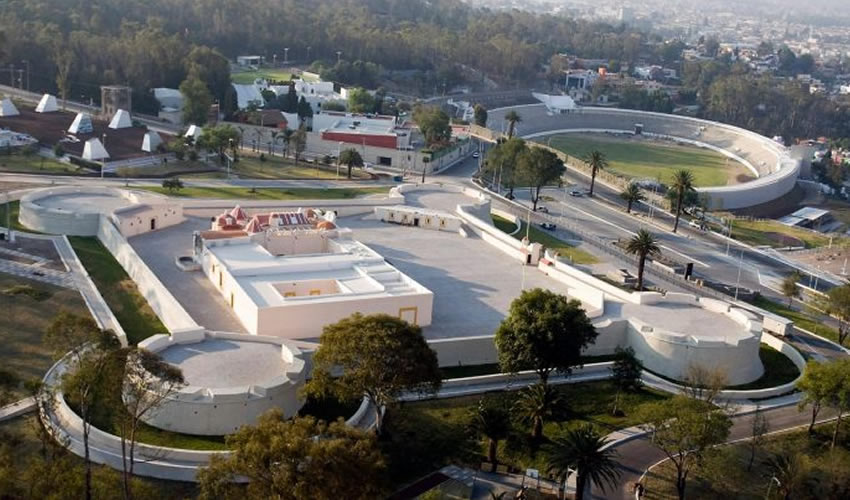 Forts of Loreto and Guadalupe

The forts of Loreto and Guadalupe are old military buildings that originally were chapels built on top of an Acueyametepec hill. Later, at the beginning of the 19th century, both were reconstituted as fortifications for military purposes.

They served as the main scene both in the battle and in the siege of Puebla, during the Second French Intervention in Mexico.

Declared as the historical heritage of Mexico, they currently house site museums for which the fort of San Loreto and Guadalupe became famous.

The forts are located in the northeastern area of ​​Puebla, on a hill whose name of pre-Hispanic origin is not known with certainty if it is Acueyametepec or Amacueyatepec, later it was known as the hill of San Cristóbal or Belén.

The story says that on this hill during a dangerous storm, José de la Cruz Sarmiento prayed to the Virgin of Loreto, despite having received the whip of lightning that killed his horse and a few chickens that were his merchandise, José de la Cruz was left undamaged, and later promoted the construction of a hermitage right in the place of the miracle as gratefulness.

In the 16th century, Franciscan friars built a hermitage on the east face of the hill. Later, that building was expanded into a temple under the dedication of San Cristóbal (An Indian boy evangelized by Motolonía, martyred and murdered by his father in Tlaxcala in 1527).

During the year 1640 to 1649, Bishop Juan de Palafox y Mendoza gave mass there to the men dedicated to extracting quarry from that same hill for the construction of the Puebla Cathedral.

By 1714 the church was already built in three naves and was already dedicated to Our Lady of Bethlehem, however, it was destroyed in a storm during the year 17561 and it took three years to complete the restorations (1756-1759). Finally, it came under the control of the Betlemite parents, which is why the area was known as Cerro de Belem.

Temple to the Virgin of Guadalupe

During the 19th century, with the idea of ​​building another temple next to the Belén area, a collection was made to make the temple to the Virgin of Guadalupe on the west face of the hill.

The construction began in 1804 and was completed in 1816, although it was worshiped until 1861. It is a structure with three naves and two towers that were left in ruins as a result of the battle of 1862.

After the beginning of the movement led by Miguel Hidalgo during the year 1810, the fortification of the Loreto fort began as a point of protection for the city of Puebla, this is due to the strategic area that this hill had to defend the city.

On September 27, 1813, with the idea of ​​defending the Puebla capital, the Guadalupe fort was built as a decision by the council authorities.

In 1816, the Spanish mayor Ciriaco del Llano ordered the construction of stone walls with lime coatings around the temples, with the aim of turning them into military positions to prevent attacks on Puebla by insurgent groups.

The hermitages were used from then on as powder kegs. In the case of Loreto, due to the condition of the hermitage, it was necessary to repair the walls, the ramps, and the central building. In Guadalupe, the hermitage was demolished and subterranean replacements were made for a vault and a cistern.

Between the forts, there is a separation of 928 meters in a straight line. They are not large due to the characteristics of the terrain. In the case of Loreto, it has circular bastions and does not have a moat, while Guadalupe has only two small bastions and a net that covered the entrance.

In 1862, by order of General Ignacio Zaragoza, the two towers were demolished to condition the fort. However, the structure was damaged and it was decided to completely demolish them as they threatened to fall.

More years later, the site was left without a roof and some walls barely standing. Thanks to funds from the Jenkins Foundation and prior to the UNESCO declaration, the Loreto Fort was restored.

The battle of Puebla

Due to their strategic importance, during the French intervention, the forts served as the headquarters of the Army of the East and the central point of the battles that were fought in Puebla.

Due to their location and the defenses that were concentrated around them, the forts represented the “door” of Mexico: if they fell, the surrender of Puebla was inevitable and with it, the free passage to Mexico City was opened.

That is why the French forces attacked them first during the battle of May 5, 1862, and the following year, strengthened and with a much larger contingent, subjected them to a merciless bombardment until they were left in ruins.

The battle of Puebla was combat fought on May 5, 1862, in the vicinity of the city of Puebla, between the armies of the Mexican Republic, under the command of Ignacio Zaragoza, and the Second French Empire, led by Charles Ferdinand Latrille, Count of Lorencez, during the Second French Intervention in Mexico, the result of which was an important victory for the Mexicans since with forces considered inferior they managed to defeat one of the most experienced and respected armies of their time.

Despite its success, the battle did not prevent the invasion of the country, it only delayed it, however, it would be the first battle of a war that Mexico would finally win.

The French would return the following year, with which a second battle was fought in Puebla in which 35,000 French fought against 29,000 Mexicans (a defense that lasted 62 days), and they would advance to Mexico City, which allowed the establishment of the Second Mexican Empire.

Finally, unable to consolidate an empire and after losing 11,000 men due to guerrilla activity that never ceased to exist, the French unconditionally withdrew from the country in 1867.

In 1930 the forts and the area surrounding the hill were declared property of the nation in service to the people, and a War Museum was built in Loreto.

In 1962, on the occasion of the centenary of the battle, the museum was expanded and provided services to the park area. Currently, in the Historic Zone of the Forts, there is also a Regional Museum of the National Institute of Anthropology and History, the Reforma Auditorium, and the Puebla House (“Casa Puebla”).

In addition, to one side is the Puebla Exhibition Center and a monument where the remains of Ignacio Zaragoza and his wife Rafaela Padilla rest.

Forts of Loreto and Guadalupe on Google Maps