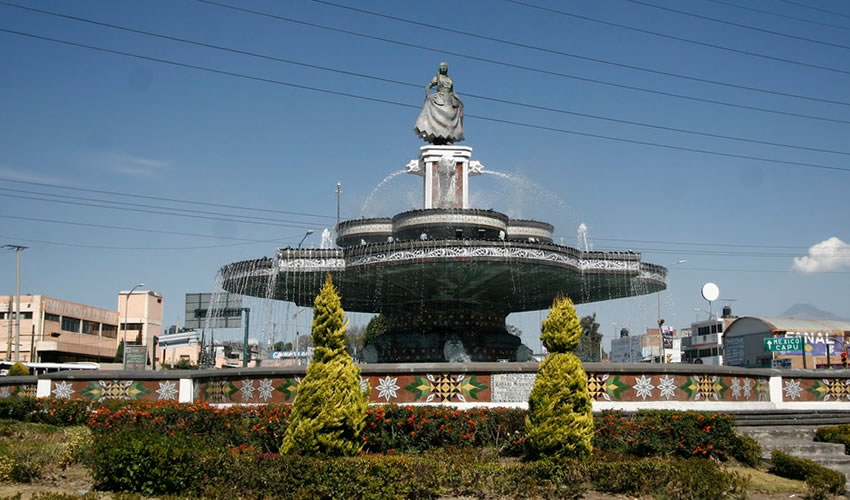 Fountain of the China Poblana

On September 27, 1971, the China Poblana sculptural fountain was inaugurated in the roundabout of Puebla City where the Diagonal Defensores de la República and the Bulevar 5 de Mayo intersect, which currently from that point, on its extension, changes its name to Bulevar Norte.

The opening ceremony was chaired by the then governor, doctor and general Rafael Moreno Valle, and the municipal president of Puebla, Carlos J. Arruti y Ramírez.

Construction works started a year earlier. This monument, located in the Santa María neighborhood, was sculpted by the Puebla architect, sculptor, and painter Jesús Corro Ferrer, who is the author of the mural of the Cuauhtémoc Stadium on the occasion of the 1968 Olympic Games.

Likewise, he is the creator of the monument and head in bronze to Victor Hugo, the monument to Alexander Von Humboldt, in the mausoleum, and the monument to General Zaragoza, he was the author of the soldier of the eastern army and the fighter from the Serrano Zacapoaxtla, in the XXV Military Zone, from the bronze sculpture to the cadet Vicente Suárez, among many others.

This monument is composed of a large footing with a central column, a curb, and two bowls, where the water accumulates. One flush with the floor and the other at the top. It measures more than three meters in height on a base of 30 meters in diameter. In its design, it follows a pattern with parts of circles that are combined with rectangles.

It was built with concrete, carved quarry stone, and white granite-based mortar. In its structure, there are Talavera inlays as an ornament, as well as eight heads of dragons, where jets of water come out of their open mouths. These additions are located in the central column, four in the lower part and the rest in the upper part, prior to the bronze sculpture of China Poblana.

Under the water outlets of the dragon heads in the upper part, the coat of arms of the state of Puebla was installed, which is made in Talavera. Other water outlets are installed around the perimeter of the upper bowl. These are steel tubes that allow water to fall silently.

Regarding the bronze sculpture of Doña Catarina de San Juan –the Catholic name assigned to China Poblana–, it is decorated with vitreous mosaic which allows it to give it shades of red, white, green, blue, and yellow, the color used for the front eagle of the skirt.

The figure is directed towards the southwest, that is, towards the center of the city of Puebla, since at that time the road ended there.

Around the fountain, there is a small green area, which is delimited by plants known as thunder-like walls, some small trees, and fir trees, as well as a staircase and light sources.

As there is a lack of precise data on the appearance of the Asian woman belonging to a noble lineage of India, whose name was Mirra, who since the Porfiriato is attributed the creation of said Chinese costume, for the construction of the statue, Corro Ferrer made use of one muse in particular: his wife.

Consequently, the statue in the China Poblana fountain has the image of María del Consuelo López y Martínez, better known as “Marychelo”. She poses with open arms, picking up her petticoat, combed with long braids adorned with tricolor ribbons.

It should be noted that this is not the first nor the only fountain dedicated to Doña Catarina de San Juan in Angelópolis, since at the southeastern end of Paseo Bravo there is another one, donated by the English colony and inaugurated on September 16, 1929.

Fountain of the China Poblana on Google Maps