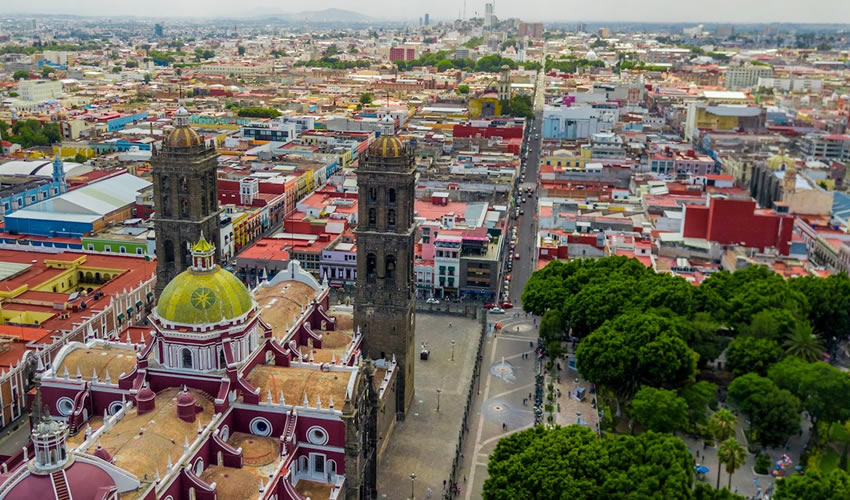 The Historic Monuments Zone of Puebla is an almost 7 km polygon that is considered the origin and historic center of Puebla de Zaragoza, the capital of Puebla State. This Zone was decreed an area of Historic Monuments in 1977 by presidential decree and then declared a World Heritage Site by Unesco on December 11, 1987.

Puebla de Zaragoza is located at the foot of the Popocatépetl volcano, and its foundation was in 1531. You can admire the mosaic of its many buildings, highlighting some, because such are its facades that feature the harmonious combination of bricks with artistic tiles and reliefs in white mortar.

The preservation of this urban-architectural heritage was the reason for the historic center of Puebla to enter the List of World Heritage Sites. The historic center still retains a lot of colonial architecture. Several of the oldest buildings were badly damaged after the 1999 earthquake, which was subsequently repaired; However, after the effects of the 2017 earthquake, some of them again suffered damage.

Of all the colonial buildings, the most impressive is the Puebla Cathedral, built in a neoclassical style. The Chapel of the Rosary in the church of Santo Domingo is an example of a Mexican dramatic baroque. Other important places are El Barrio del Artist, where local arts and the Center and the Zocalo are produced, where the Puebla Cathedral and the Municipal Palace are located.

The area of historical monuments subject to the Federal Decree comprises an area of 6.99 square kilometers consists of 391 blocks in which there are 2,619 buildings with historical value built in three centuries XVI and XIX and of which 61 were destined, at some time, to the religious worship

Among the aforementioned buildings, buildings have been destined for educational purposes and assistance services, as well as for the use of civil and military authorities and among them the hospitals of San Pedro, Belén, San Roque, San Juan de Letrán, of San José, the Colleges of San Ildefonso and San Jerónimo, the Normal School of Teachers, the State Conservatory, the railway stations, the Penitentiary, the San Juan de Dios Prison, the Victory Market and the Forts of Loreto and Guadalupe.

The remaining 2,487 buildings are civil buildings for private use in which Mudejar influence is combined with Renaissance forms in various architectural elements, with manifestations of great personality emerging in the Baroque era, especially in the cladding of buildings and in ornamental details that define A true regional style.

These modalities are manifested until the end of the 19th century, integrating baroque and neoclassical elements with expressions of romanticism and the eclectic of the Porfirian era even though in many cases only colonial architectural structures were covered or adapted.

List of the most representative buildings, both religious and civil, of the different historical stages of the colonial architecture, of independent Mexico and prior to the Mexican Revolution that belong to the picture of the Historic Center of Puebla:

The Benemérita Autonomous University of Puebla for more than 4 decades has made efforts to preserve buildings that integrate the wealth of the heritage of the historic center of Puebla.

From the first years of the seventies and until 2002 the University had 23 buildings in the historic center and by 2013 it already had 34. Many were in ruins when it was acquired and are currently used for their schools and administrative offices.