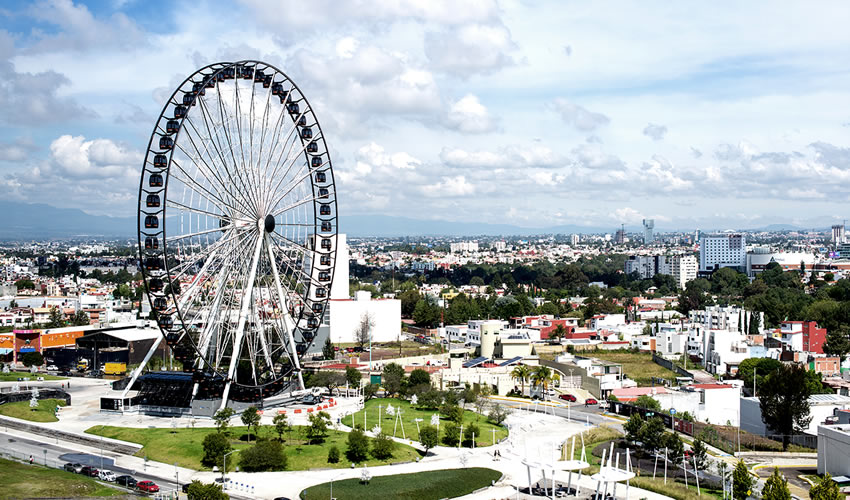 Reasons why travelers should visit Puebla

Puebla is perhaps the most overlooked, underrated urban travel destination in Mexico. With more than 1.5 million inhabitants and a long history of shaping the country’s cultural identity, Puebla is everything but.

Whether you’re into shopping for hand-crafted artisanal wares or hurling insults at a wrestling match, sampling world-class cuisine in a restaurant or savoring sinfully greasy appetizers on the street, climbing the world’s largest pyramid or descending into its smallest volcano, sipping local liqueurs at a century-old cantina or dancing until dawn at a trendy new nightclub, you’ll find it all here.

What’s more, Puebla is a safe destination in Mexico that leads visitors, slightly and gently, off the usual, well-trod tourist path.

It’s a “perfect” Colonial city. Founded on April 16, 1531, Puebla was the first city in Mexico built entirely from scratch by Spanish settlers. No indigenous structures were dismantled or repurposed.

Situated along the banks of the Atoyac and San Francisco rivers, Puebla followed developers’ ideal street plan — a basic grid pattern determined by compass points (north, south, east, west) with the main square, or zócalo, at its center. This system made Puebla’s downtown core easy to navigate, then and now.

It’s chockfull of historic monuments. Puebla, declared a World Heritage Centre by UNESCO in 1987, preserves more than 2,600 monuments in nearly 400 city blocks. They include the city’s Cathedral, which is said to have some of the tallest towers of any church on the continent.

In an untouched urban network, the historic center of Puebla comprises major religious buildings, such as the Santo Domingo church, as well as superb palaces [like] the host of old houses whose walls are covered in gaily colored tiles.

Although 19th-century transformations resulting from the Reform Laws (1857) modified the urban landscape through the closing of many convents, they made it possible for Puebla to be endowed with high-quality public and private architecture.

It’s the reason anyone celebrates Cinco de Mayo. Frequently mistaken for Independence Day, May 5 is the anniversary of a somewhat miraculous military maneuver in Puebla. In May 1862, some 6,000 French troops descended upon the city, looking to collect on Mexico’s foreign debt with a land grab.

They were met with unexpected resistance from a scrappy band of 4,000 Mexican soldiers, many of whom were farmhands armed with mere machetes. They fended off the French for several days, stopping four attempts to take the city. In 2012, Puebla celebrated the 150th anniversary of the battle with a military parade, a nighttime spectacular, and other fanfare.

It’s where the Mexican Revolution began. The capital city is not only the place where Mexico’s famous victory over the French took place but also the birthplace of the Mexican Revolution of 1910. It was here, in a Colonial mansion downtown, that Aquiles Serdán and his family stockpiled weapons for the fight against President Porfirio Díaz.

On November 18, two days before the revolt was officially scheduled to begin, authorities learned of the stash and surrounded the building. A bloody stand-off ensued. The house, still riddled with bullet holes, today houses the Museo Regional de la Revolución Mexicana. Its relatively small but important collection (including a room dedicated to women’s contributions) helps tell the story of a few lesser-known national heroes.

It preserves and cultivates public art. Talavera pottery is among the few Mexican products with protected status (DO4), which means its production must meet established quality standards. The sought-after ceramics have been made in Puebla for more than 400 years and are used to adorn buildings all over town.

One of the more notable examples is the Casa de Los Muñecos (2 Norte #2), which gets its name from the grotesque human figures that decorate its facade. Legend has it that the tiles ridicule city council members who in 1792 tried to stop the building’s owner from erecting a mansion taller than City Hall.

Visitors who’d rather see more contemporary public art should check out the amazing murals in the Xanenetla neighborhood.

It’s next to the world’s largest pyramid. Puebla’s only major suburb, Cholula, is the longest continuously occupied ceremonial center in the Americas—and one of the most enigmatic. In fact, it’s quite possible to miss the massive Great Pyramid of Cholula even if you’re staring right at it.

The structure, overgrown with natural vegetation for centuries, looks like a grassy knoll from a distance. Archaeologists can’t unearth the pyramid, which the Guinness Book of World Records calls the largest ever constructed because Spanish conquerors built a church on top of it in 1594.

Today, La Iglesia de Nuestra Señora de Los Remedios is both a protected Colonial monument and a destination for Catholic pilgrims. To study the structure, whose Nahuatl name is Tlachihualtepetl or “artificial mountain,” archaeologists dug nearly 5 miles of tunnels, some of which are open to the public (as of September 2012).

It’s where you’ll find the world’s small volcano. Located in the Libertad neighborhood in northwest Puebla, the Cuexcomate volcano was once the only landmark in the area. It’s believed to be a secondary crater or extinguished geyser created by bursts of magma and sulfuric water from nearby Popocátepetl during its last violent eruption in 1064.

The little limestone cone measures a mere 43 feet high and 76 feet in diameter. Legend has it that Cuexcomate once served as a site for human sacrifices to indigenous gods and later a depository for citizens who committed suicide, because “they didn’t merit being honorably mourned or buried in sacred ground.”

Visitors today who aren’t creeped out by that can descend a spiral staircase to the bottom of the cone.

It’s where mole poblano, chalupas, and chiles en nogada were invented. The gastronomy of Puebla is among the most varied and exquisite in Mexico. “A good meal should be prepared carefully and, in Puebla, they’re true experts in this area,” write the authors of Mexican Cooking for Newlyweds.

“For example, take mole poblano, which simply through the act of preparing it, becomes a cause for celebration.” Beyond mole, Puebla’s restaurateurs serve up an impressive array of delicious dishes, from classics like tinga (a chipotle-laced beef or chicken stew) to exotic seasonal specialties like escamoles (ant eggs).

It’s where the first public library in the New World was founded—and still exists. The Biblioteca Palafoxiana was started in 1646 inside what was once the seminary of St. John’s College (now home to Puebla’s cultural center). The library today preserves 45,058 volumes dating from just before until just after the Colonial era.

Many of its works are of global importance, from an original copy of the Nuremberg Chronicle (1493), which charts human history according to the Bible in words and more than 2,000 illustrations, to books printed in Mexico before 1600, like Vocabulary in Castilian and Mexican, which was essentially the earliest New World dictionary.

Visitors can’t manhandle the books, but they can admire the room’s gorgeous altar and finely carved wood shelves.

The state of Puebla is home to one of the most reputable animal preserves in the Hemisphere. Africam Safari was the first zoo in Latin America to receive accreditation from the Association of Zoos & Aquariums, due largely to its conservation efforts and high standards of animal care.

With partners in Mexico and around the globe, Africam works to recover wild populations (such as the golden eagle) and to preserve ecosystems and soil.

The park itself protects scores of endangered species and indigenous flora and fauna and strives to teach the public about them. In a single trip, it’s possible to watch a hippo bathe, a tiger wakes up from its nap, an antelope toss around a fallen tree branch, and a joey emerges from a mama kangaroo’s pouch.