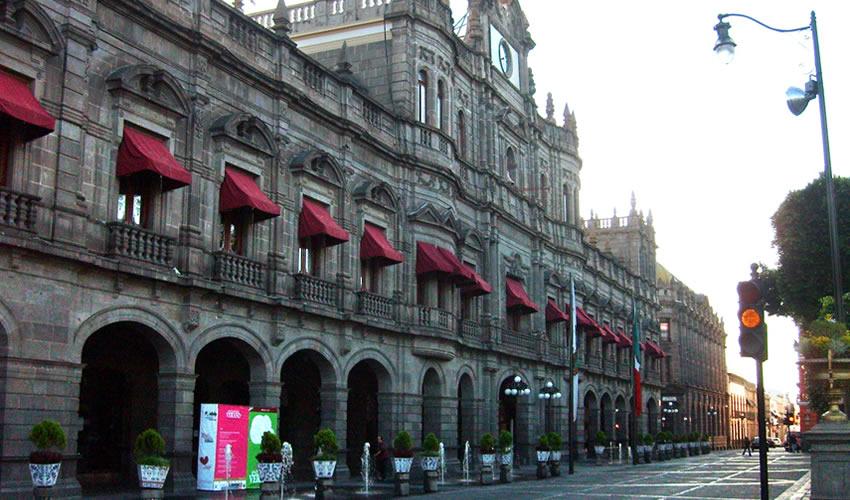 The Municipal Palace of Puebla is the seat of the City Hall of the city of Puebla located in front of the Plaza Mayor of the Historic Center, a world heritage site since 1987.

The current building in the style of Elizabethan architecture with neoclassical and renaissance influences Italian was started in 1887 and finished in 1906 according to the project of the English architect Charles T. S. Hall. The seat of the municipal civil power was established in the same place in 1536 as part of the founding process of the city.

The seat of the City Council in time

The history of the Puebla City Council is inscribed in the context of the founding of the city as three public places are necessary for the dispatch of the businesses of the towns: the house of the Cabildo or Council, the house of the Audience, and the jail, and that for others they were forced.

From the foundation the entire block on the north side of the Public Square was assigned to the council, having as a characteristic the portals that gave it its original name: Portal de la Audiencia.

In 1536 the City Council sold the lots on the west side of the block and forced the buyers to build portals, as well as the others adjacent to the Plaza. The Council required the permission of the viceroy since the regidores could not dispose of property without his permission.

However, by the same century, the City Council had recovered those estates. It was customary, in the early years, for the council to meet at the house of Corregidor Hernando de Helgueta, as read in a document from the Cabildo of February 25, 1533.

The first Municipal Palace is erected

The building of the Town Hall began to be built in 1536 and consisted of three rooms that occupied only a quarter of the facade of the current Palace.

The main room corresponded to that of the Cabildo, which had a stone platform and a staircase, further inside there was a cloister and on the façade, there was a portal, which continues to be its characteristic, next to it was the home of the mayor.

To the west of the street, the Audiencia and the jail were arranged, and behind this, the Alhóndiga and the Corral del Concejo (1546-76) were built, at the same time the Chapel of the Council dedicated to San Miguel was erected, which it is cited in a document from 1561, but around 1578 a new one was built over the alley and two arches, today the Town Hall Passage, “for the regidores and market people”.

At the beginning of the 17th century, a second floor was added to the Town Hall, in addition to the aforementioned chapel, as well as for the remaining buildings (house and shops) to the west of the alley, today Pasaje.

Behind these constructions, another alley was made but from the West to the East that communicated with the current passage.

Towards the corner of 5 de Mayo, above the houses, the accounting departments were located (1617). The archive was next to the Cabildo room, in the main building of the Town Hall.

According to the information given by the historians Cerón Zapata (1714) and Veytia (1780), the offices of the Audiencia and the prison were located in the space of the current Municipal Palace but “lacked brilliance and comfort” and contrasted with the aspirations of the inhabitants of the Angelopolis who at that time saw the construction of the great Cathedral of Puebla.

In 1714 the mayor Juan José de Veytia y Linaje began the construction of a new building for the City Council, raising it from the ground up. In this building, the corner of the second floor of the Far East, now 2 North, was reserved for the mayors.

Outside it had a uniform balcony and inside the chapter house and chapel. After the main door, a staircase was accessed that divided and led to a magnificent corridor with 8 stone arches and well-carved iron balustrades that led to the courtroom, jail, and the mayor’s home and above whose door was the stone tombstone was attached to it, which was later placed in the cube of the hallway.

This commemorative tombstone of the date of construction of the second City Council, together with the lintel and the jambs of the old hall, is currently attached to the wall of the corridor, adjacent to the Hall of Sessions of the Municipal Council.

Near the current Passage and where the previous mayors had lived, the jail that still served for this purpose was located in 1780, the upper rooms were used as a women’s prison, a chapel for executed persons, torture, and visiting rooms, the latter had a communication to the corridor of the governors’ dwelling (1754-84).

As of the second presidential term of General Porfirio Díaz, the country underwent a gradual transformation, the important cities tried to imitate the urban and architectural model of Paris.

Puebla was no exception; On February 17, 1897, the official call for the construction of a new and different council building in accordance with the guidelines of modern architecture of the time was published in the Municipal Gazette. The winner was the English architect Carlos T. S. Hall.

It is important to mention that Architect Hall did not demolish the entire old building, he took advantage of many of the heavy masonry and quarry walls.

By 1901, being exact January 5, before the work was completed, taking advantage of a visit to Puebla made by General Porfirio Díaz, President of the Republic, he was invited to “pre-inaugurate” the building, still without the complete facade. The almost completed work was delivered by its author on June 1, 1903.

The official inauguration took place in November 1906. Since then, despite the vicissitudes of the 1910 Revolution, the tremors, and the different municipalities that have governed Angelopolis since then, the Municipal Palace has not undergone substantial modifications, preserving its beauty and elegance, the worthy seat of a city that, due to its architectural richness, which includes the town hall building, has been declared a “World Heritage Site”.

The Cabildos Room, adorned with plasterwork, houses the original of the Royal Certificate signed by Isabel de Portugal and dated March 2, 1532, by which Puebla is granted the title of “City of Angels”.

The Cabildo Hall is one of the best of its kind in the entire country. There the sessions of the body of councilors are held, accompanied by the municipal president, the trustee, and the secretary of the City Hall, in which the most important decisions that govern the destiny of the inhabitants of Puebla de Zaragoza are made.

At the entrance of this room, there is a relief with the personification of the city of Puebla that welcomes 3 characters that represent peace, work, and the arts. Below this relief, there is a stone plaque that recalls the remodeling of the Audiencia in 1714, as can be read in the last line. This plaque was at the entrance to the City Hall building, prior to the Charles Hall remodel.

The Salón de Cabildo is a clear example of the French influence that the arts had throughout the country during the government of President Porfirio Díaz.

The Atlanteans in this room support the ceiling with their heads, making reference to the fact that intelligence and knowledge should be the virtues that support this place, the seat of the Municipal President and the Councilors.

The set of ceiling paintings represents attributes of the city and its history. In the center is painted a personification of the abundance of Puebla, scattering what appear to be seeds and coins, surrounded by other attributes carried by angels such as a gear, a symbol of industry, the rod of Mercury, god of commerce, and an anchor, symbol of interoceanic trade.

In the panel near the balcony, angels carry ears of wheat and fruits representing agricultural abundance. On the opposite panel, the angels carry attributes of good governance such as the scales of justice, the torch of knowledge, and the serpent looking in the mirror, symbolizing prudence. The 3 virtues that a good ruler should have.

That is why the chair of the Municipal President must always be placed under this painting.