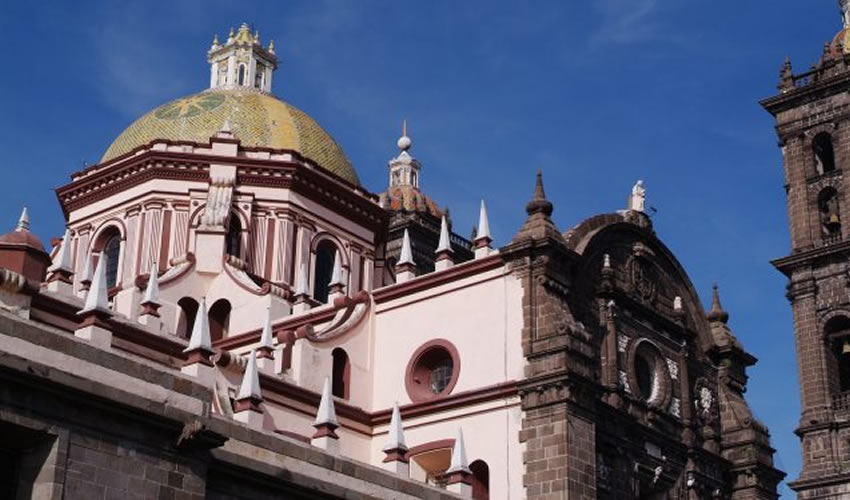 Walking tour through the Historic Center of Puebla City

Strolling through the unique historic center of Puebla, you will be amazed by the number of charming colonial buildings with charming details and colorful tiles, and you will be impressed by the elegant patios.

The Zocalo of Puebla City is the best place to start your walk. This square has existed since the founding of the city in 1531 but was mainly used as a market until the 18th century. Throughout history, it has been a meeting place and social center of the city. This tree-lined square is surrounded by a wide variety of shops and restaurants.

The Municipal Palace (City Hall) of Puebla, is located on the north side of the Zócalo and was completed in 1906. The building is an example of the Franco-Spanish Renaissance style typical of public architecture in Mexico during the government of Porfirio Díaz.

The bases of the towers were built and testify to the lofty planes. The second phase of construction was under the direction of Bishop Juan de Palafox y Mendoza, who consecrated the cathedral on April 18, 1649. The main façade, in a sober Mannerist style, is made of dark gray quarried stone and was completed in 1664.

Highlights of the Cathedral of the Immaculate Conception of Puebla:

The House of the Dolls houses the University Museum. This building combines elements that were common in Puebla’s Baroque architecture of the 18th century: masonry, brick, tile panels, mortar, and wrought iron. There are human figures represented on the tiles that have been interpreted in different ways.

The most common legend is that the owner of the house, Agustín Ovando de Villavicencio, wanted to build a third floor in his house. The city fathers did not allow it, so he took his request directly to the king who granted permission to him. Then he built the 3rd floor and mocked the city fathers placed on it. An alternative interpretation is that the figures represent the trials of Hercules.

The Biblioteca Palafoxiana is a library in Puebla City’s historic center, in the Mexican state of Puebla. Founded in 1646, it is recognized by UNESCO for being the first and oldest public library in the Americas.

Today, it houses the Institute for Bibliographical Research. Palafoxiana Library is a book museum and continues its work as a universal library. In addition, it has a Ludic Room to promote book arts among children.

The Dean’s house is a historic building in the city of Puebla, which dates from the year 1563 but was occupied in 1580 (the date that is engraved on the lintel of the upper floor window). Its name comes from the position of its first owner and builder, Tomás de la Plaza y Goes, dean of the Puebla Cathedral.

According to the National Institute of Anthropology and History (INAH), an institution that protects and manages the building that is now a museum, the Dean’s house is “a magnificent example of what some of the mansions were in the first century of life of the City of Puebla.

The Museo Amparo, located in the historic center of Puebla City, is one of the most important historical museums in Mexico. It was inaugurated in 1991 and sponsored by the Amparo Foundation, which was founded in 1979 by Manuel Espinoza Yglesias in honor of his wife.

Living Museum (Museo Viviente) is a space of knowledge and encounter with nature, our goal is to make you reflect on the care of animal species and the environment in an educational environment. In the museum, you can find 7 exhibition halls with more than 70 species of reptiles, amphibians, and arachnids among others.

On Sundays, Los Sapos Square is an open-air antique market, but any day of the week you can visit the antique shops in the square or have a drink in one of the bars or restaurants. Many of the establishments have live music in the evenings.

The San Francisco River flowed through the place where the Heroes of May 5 Boulevard is today, one block from 6 Sur. The river was diverted but the toads that used to proliferate in the area near the river left their name.

El Parian Market was established in 1796. Here you will find a wide variety of Puebla handicrafts, including Talavera pottery, textiles, clothing, onyx figurines, and traditional sweets. There are also crafts from other states, as well as jewelry and leather goods.

House of the Alfeñique (La Casa del Alfeñique) is a type of candy similar to meringue. This house owes its name to the elaboration of stuccoes reminiscent of this concoction of sugar and egg white. This was the house of a wealthy blacksmith, who had the house built in this style to please his fiancee. Today, it houses the Puebla Regional Museum, with a  beautifully restored interior, on the first two floors the history of Puebla is exhibited and on the third floor, you can see the period furniture and the family chapel.

In colonial times, Artist’s Quarter was occupied by textile factories. It was remodeled in 1941 but retains a strong colonial air. There are statues and ornate decorations to admire here, as well as many artists’ studios that are open to the public, where you can watch the artists at work, buy their work, or have your portrait drawn. Outdoor concerts and theatrical performances are occasionally held.

The Teatro Principal of Puebla, completed in 1760, is one of the oldest theaters in Mexico and the oldest still operating as a theater. It was originally called the “comedy corral” and was also sometimes called the “colosseum” due to its circular base. In the early 20th century, it was damaged by fire and restored in the 1930s. The interior can be visited between 10:00 and 17:00.

The conventual Temple of San Francisco is a religious temple of Catholic worship that belongs to the ecclesiastical jurisdiction of the Archdiocese of Puebla de Los Ángeles, dedicated to the Five Wounds of San Francisco. It was the first convent established in Puebla City. It is located in the oldest area of ​​the city. In one of its chapels, the incorrupt body of the lay brother Sebastian de Aparicio is venerated.

Casa Serdan houses the Museum of the Mexican Revolution, is also known as the House of the Serdán Brothers. The first battle of the Mexican Revolution took place here on November 18, 1910, when the Serdán family was betrayed two days before the planned uprising against President Porfirio Díaz. The house retains bullet marks from the battle. The museum shows the life and times of Aquiles Serdán (1877-1910) and his family and has a room dedicated to the women of the Revolution.

Calle 6 Oriente is known as Calle de Los Dulces because of the number of candy stores that are sold here, with a wide variety of traditional sweets, cookies, and other specialties from Puebla, among which sweet potato sweets, traditional sweet potato sweets, stand out. and the Santa Clara pancakes, cookies covered with cream, and ground pumpkin seeds.

The construction of the Church of Santo Domingo took place between 1571 and 1611, except for the tower on the left, which was not completed until the 19th century. The dark gray façade is severe, but the interior of the church is more ornate, with gilded stucco work. The impressive main altar dates from 1688 and is attributed to Pedro Maldonado.

To the left of the main altar is the Chapel of the Rosary, built in 1690. This is an outstanding example of Mexican Baroque, with dazzling use of gilded stucco and onyx stone.

Next to the church of Santo Domingo, on 5 de Mayo 409, is the Galería Bello y Zetina. This small museum features fine and decorative arts from the 19th century, with paintings by José Agustín Arrieta and Gerardo Murillo Cornado (known as Dr. Atl).