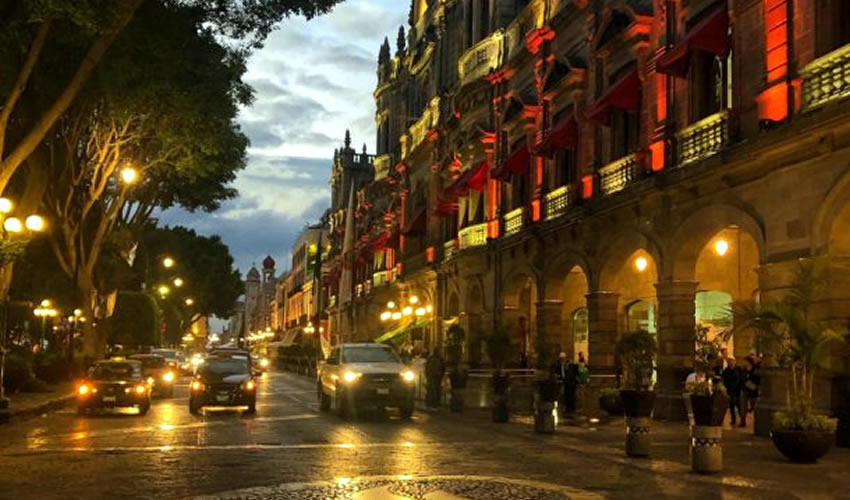 Puebla is a busy city with a lot of people who need to get around.  so it is necessary to have a mass and conventional collective public transport system to meet the needs of the city, made up of various transport systems. People get around in many different ways including the bus, car, and walking. Most tourists mainly get around using the Metrobus and Uber.

The Metrobus is what the bus system in Puebla is called. The buses in Puebla are a popular way for people to get around, which means they are usually packed. Some bus rides can be a bit uncomfortable because of how packed they are.

Line 2 of the RUTA system runs along avenue 11 north-south from Diagonal Defensores de la República to Margarita’s terminal with an extension to “Calle Limones” or 157 Poniente, covering a distance of 13.8 km.

Line 2, like line 1, works through a card charging system, thus avoiding assaults on the drivers of the units. The arrival of line 2 of the RUTA streamlines the vehicular flow on the north-south 11th street.

Line 3: It was inaugurated on November 13, 2018, and operates with 35 feeder routes. It has a connection with the Line and runs along the Valsequillo Boulevard from the Periférico Ecológico and Héroes del 5 de Mayo to CAPU, covering a distance of 15.3 km.

Line 3 works through a card charging system approved with lines 1 and 2.

The Puebla cable car is a tourist attraction located in the Los Fuertes area that connects the Exhibitor Center with the monument to Zaragoza. It has an extension of 688 meters.

The Puebla-Cholula tourist train is a one-way light rail that connects the center of Puebla with the center of Cholula. It is 17 kilometers long and travels at about 35 km/h on average.

Although it was originally conceived as an exclusively tourist project, the state government announced that it will have a cheaper rate for Pueblans who frequently use it as a means of transportation. It was inaugurated on January 23, 2017.

Public transport buses: they are in charge of transporting the largest number of people every day, thanks to the variety of routes that exist in the city. 80% of the city is communicated through this service.

As of 2017, the Mexican company Cycloshare began to operate an extensive network of public bicycles in the city of Puebla, covering from the historic center of the city to Ciudad Universitaria, it is expected that this network of cycle stations will be the largest in Latin America.

The Central Passenger Bus Terminal of the City of Puebla is the main one in Puebla and provides access to the vast majority of Mexico through a wide range of trucking companies. Due to the proximity of Puebla to Mexico City, there are numerous routes that go from the CAPU to two of the most important bus depots in the capital of Mexico City.

In addition to having lines for various destinations in the southeast of the country, such as the states of Veracruz, Oaxaca, Tabasco, Chiapas, Campeche, Yucatán, Quintana Roo.

Outside the main gates of CAPU, there are numerous local bus routes that can carry passengers throughout the city, as well as fleets of taxis. For passengers arriving at the CAPU, it is advisable to buy a taxi ride with one of the authorized cabins for safety and cost.

Puebla has a bus terminal, the CAPU, which is one of the largest in Latin America. Buses from lines ADO, Estrella Roja, Futura, AU, OCC, ORO, ERCO, ATAH, Estrella Blanca, and other lines enter and leave there.

It is a private commercial and industrial freight transport company. Puebla is currently part of the distribution, loading, maintenance network, due to its supply base and permanent administration.