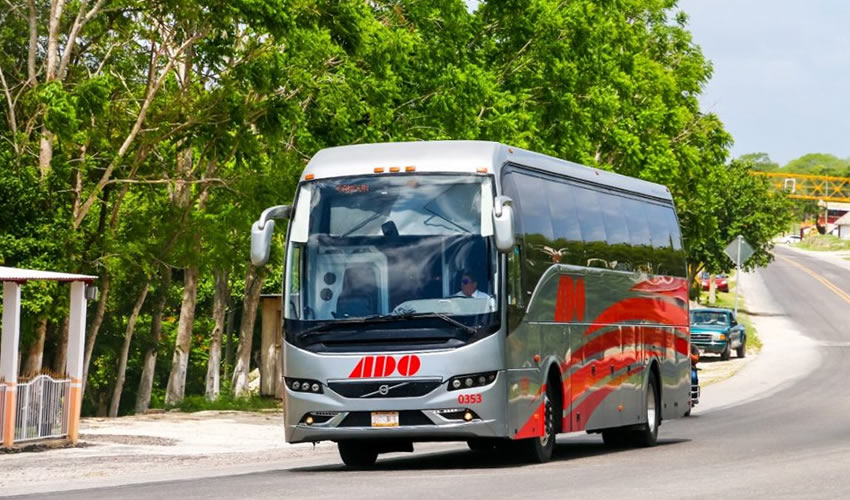 How to get from Mexico City to Puebla?

How to get from Mexico City to Puebla?

The cheapest way to travel to Puebla from Mexico City is by taking the bus. The buses are reliable and easy to use and run throughout the day and night. The cost of traveling between the two cities will depend on the type of bus you get.

The ADO service, which is more like a first-class service, is a bit more expensive starting at MXN 230 depending on the time of departure, while the AU and other second services can cost around MXN200.

However, if you’re in a group, it may be more cost-effective and convenient to get a private transfer. Splitting the cost of a minivan between you and eight pals, for example, could result in a fare of around $230 for an entire minivan – more expensive than the bus, but for the convenience, definitely worth considering.

Getting to Puebla by bus from Mexico City

The bus journey time between Mexico City and Puebla is around 2h and covers a distance of around 123 km. Operated by Estrella Roja, Autobuses Unidos (AU), ADO and others, the Mexico City to Puebla bus service departs from Mexico City TAPO and arrives in Puebla CAPU. Typically 595 buses run weekly, although weekend and holiday schedules can vary so check in advance.

The number one option to get from Mexico City to Puebla is to take the ADO or AU bus. The bus is comfortable, reasonably priced, and reliable.

To catch the bus from Mexico City, head to the TAPO (“Terminal de Autobuses de Pasajeros de Oriente”) terminal – the closest metro station is San Lazaro (lines 1 and B). Here you can see bus timetables, talk to staff and purchase tickets directly from the windows.

There are several bus companies that drive the route, so you may have a choice of not only AU and ADO buses but other companies too. The ADO bus is basically the “first-class” option, featuring reclining seats and bathrooms, while AU and other companies are more of a second-class service.

Buses will arrive at either CAPU (Central de Autobuses) Terminal, which is around 6 km from Puebla City center, or 4 Poniente Terminal, which is downtown of Puebla. From there, you can take a taxi or Uber to where you are staying in the city center.

Getting to Puebla by bus from Mexico City Airport

If you’re not staying in Mexico City and your aim is to get to Puebla as soon as you touch down at the airport, the good news is that you can catch a bus directly from Benito Juarez International Airport. This means you’ll bypass the busy city entirely making for a much smoother connection between the two cities.

The other good news is that this particular route is served by ADO. The bus runs around every one to two hours. It costs around 330-350 MXN and arrives after less than 2 hours at CAPU or at Terminal Paseo Destino, just outside of Puebla City.

How to get to Puebla from Mexico City by car?

Renting a car in Mexico means the ease of traveling around at your own pace with the freedom and flexibility to travel how you want, when you want. With your own set of wheels, you don’t have to rely on public transport, or their timetables, and you don’t have to deal with haggling with taxis either.

Renting a car in Mexico City is pretty easy, and it sets you up for a great adventure ahead on a road trip to Puebla (and beyond). There is a huge selection of car rental companies, both at Mexico City Airport and within the city itself.

If you do choose to rent a car, you should definitely make sure to shop around and use a reliable, reputable company (make sure to read reviews before you decide on what company to use). The price will vary throughout the year and will also depend on the company, but on average, car rental in Mexico starts at around $15-30 USD per day.

How to get to Puebla from Mexico City by private transfer?

For those of you who are not confident driving in Mexico, but don’t want to deal with buses and taxis, there is another option. Private transfers provide a totally stress-free and straightforward route to reaching your destination.

Particularly popular with those who aren’t on a shoestring budget (that’s because, at around $150 USD, it’s not cheap), private transfers offer a little bit of luxury. Further adding to convenience, you can book your private transfer online in advance and arrange for your driver to meet you at the arrivals gate at Mexico City’s airport.

Alternatively, if you’re sticking around in Mexico City for a few days before traveling to Puebla, you can book a private transfer to pick you up at your hotel or accommodation.

There are a few different options to choose from when it comes to transferring companies. As with hiring a rental car, it is always best to compare prices and check reviews before making your final choice.

There’s also a range of different models and sizes of cars that you can opt for, going all the way from a compact car to a minivan. The latter is a great choice for those who are traveling in a group, because you can split the price between up to nine passengers, thus making it more budget-friendly.

The drive takes two hours, and you’ll be whisked along with air conditioning, professional drivers, and comfortable seats. The cost of all this luxury starts at around $160 USD.

Does Puebla have an airport? Yes, it does! In fact, Puebla has an international airport. Its code is PBC. However, this is lesser used by travelers than Benito Juarez International Airport (in Mexico City), as more flights naturally connect to the capital than to Puebla.

There are no direct flights to Puebla from Mexico City. In fact, getting there from Mexico City by plane can be quite an ordeal involving a layover in other cities such as Monterrey and Tijuana. For that reason, flying is simply not a good idea!

From Mexico City’s airport, it’s easy to connect to Puebla by bus.

There are actually multiple bus stations in the Mexican capital which makes it useful for wherever you happen to be staying in the city.

Firstly, there’s TAPO or Terminal de Autobuses de Oriente. It’s situated in the eastern part of Mexico City between the airport and the city center. Luckily, the bus station is connected to the city center by both the metro (Lines 1 and B) and the Metrobus (Line 4); making it easy to get to if you’re staying in the city. Make sure you get off San Lazaro Station – single journey tickets on either metro or Metrobus cost just MXN6 ($0.30 USD).

There’s also the Central Mexico Norte Station. This is the northern bus terminal in the city; it can be reached by metro or Metrobus – the station is Mexico Norte Station, but it can be quite complicated to reach as you have to change lines twice. If you have luggage, you are better off getting a taxi or Uber to get to Norte instead.

Buses also depart from Benito Juarez International Airport from both Terminal 1 and Terminal 2. If you somehow arrive at a terminal that’s different to the one that you’ve booked the bus from, don’t panic – there are free shuttle services that connect both terminals. You can purchase your ticket from one of the numerous ADO counters in the airport, or you could purchase one online before you arrive.

As the buses departing from the airport are much less frequent than those from the city, you may want to consider taking Metrobus Line 4 to TAPO station. If you’ve just missed a bus at the airport and you have to wait two hours, this would be a much more time-effective way to go.

Where is the Puebla bus station?

Once you’ve arrived in Puebla you’ll find yourself at one of Puebla bus stations – watch out, as they’re actually are three, and make sure to pick the one that is closest to your accommodation!

The main terminal is called Centro de Autobuses Puebla (CAPU), which is actually 6 kilometers (3.7 miles) to the northwest of the center of the city.

The second bus terminal is 4 Poniente, in Downtown Puebla, but it’s still fairly far from the center of Puebla.

How do I get from the Puebla bus station to the city center?

Getting from CAPU to the center of Puebla is a simple matter of a 15-minute car journey. The easiest and quickest route once you get off the bus is to take a taxi from outside the bus terminal itself. Make sure you take an authorized taxi. The ride to the city center should cost around MXN80 ($4 USD).

If you have a local SIM card or internet service, you could also order an Uber.

If you want to take public transport, you can actually take yet another bus from CAPU to the Puebla city center. The bus stop is located just across the street from the terminal – look for a sign that says “Centro de Convenciones”. The ticket to the city center from here is purchased directly from the driver as you board and costs MXN 6.

The only difficulty with taking the bus is that it will drop you off at the Convention Center, a five-minute walk from the Main Square – that’s because traffic in the Historic Center of Puebla is restricted.

Is there a direct bus between Mexico City and Puebla?
Yes, there is a direct bus departing from Mexico City TAPO and arriving at Puebla CAPU. Services depart every 15 minutes and operate every day. The journey takes approximately 2h.

How far is it from Mexico City to Puebla?
The distance between Mexico City and Puebla is 106 km. The road distance is 130.4 km.

Where can I stay near Puebla?
There are 319+ hotels available in Puebla.