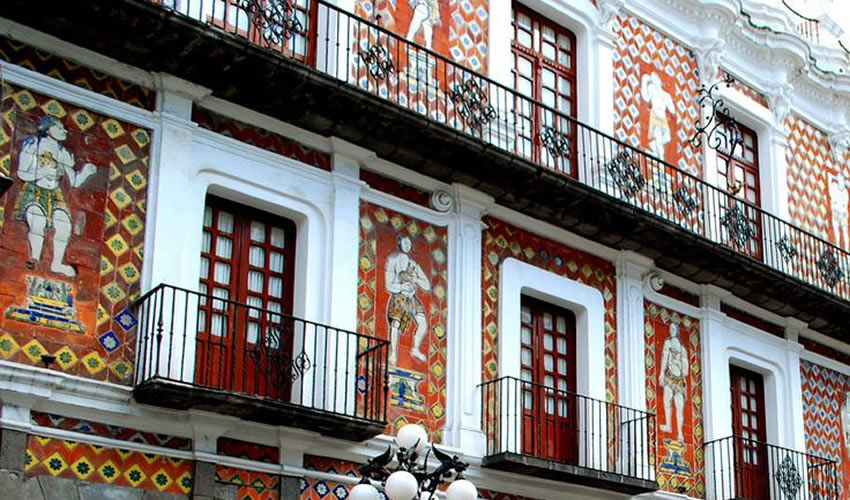 The House of the Dolls is a historical building considered one of the most notable examples of civil architecture in Puebla from the 18th century. It is located in the first block northeast of the zocalo in the city of Puebla.

Since 1983 it has been part of the patrimony of the Meritorious Autonomous University of Puebla and is currently the headquarters of the BUAP University Museum.

The historian Arturo Córdova Durana affirms that the house is in “one of the main lots adjacent to the Plaza Mayor that, in the 16th century, the regiment of the newly founded city of Puebla gave at the mercy of Captain Juan Ochoa de Elejalde, conqueror and clerk of the army of Hernán Cortés”.

The same historian affirms that the last of the descendants of Juan Ochoa de Elejalde, Andrés de Pardiñas and Villar de Francos, Count of Castelo, in 1784 sold the farm to the captain and regidor Agustín de Ovando Cáceres de Ledesma Núñez de Villavicencio.

Doctor Hugo Leicht, in his book Las Calles de Puebla, points out that the house was built by Agustín de Ovando y Villavicencio.

Thus, during the history of Puebla, the house has been known as Casa del Conde de Castelo and Casa de Ovando. But the best-known name for this house is the one that the population has given it: House of the Dolls.

This name is due to the facade of the house: one of the most admired among the baroque houses of Puebla.

There are three levels on the façade. In the first, twelve openings: ten correspond to windows and the two largest, to doors. Although it is a single facade, it corresponds to two houses.

On the second level, eight panels alternate with eight balconies, with the coat of arms of the Ovando and Villavicencio family remaining in the center, above the main entrance.

In the third level, the alternating game of boards and windows is repeated. On the cornice, there is a running railing. Higher up, an undulating cornice, six gargoyles, a railing, and six flowerpots at the top.

The complex is an extraordinary example of a Puebla Baroque façade: at the base, a gray quarry trim; on this, a small strip formed by red clay bricks and tiles. And the most striking: formed with tile mosaic, sixteen anthropomorphic figures presented in a moment that stops their movements.

It was restored by the architect Ambrosio Guzmán in 1987, who served as the first director of the University Museum.

The house was damaged by the 1999 earthquake, so it was closed for seven years for remodeling work. It was reopened to the public on October 4, 2006.

Popular tradition mentions that Agustín de Ovando, with the dolls’ dolls, made fun of the councilors who opposed his house being taller than the government house.

The historian Enrique Cordero y Torres refers to the legend that Ovando made fun of the councilors based on the animals and attributes that some of the dolls present: the dictator, and the snake … These popular versions do not consider that Agustín de Ovando himself was a councilor.

One of the most elaborate versions of the meaning of the figures on the façade is due to the researcher Erwin Walter Palm who affirms in a well-documented analysis that the façade presents – in a densely syncretic account– at the top, a party in which people dance to the music of joy because Hercules has killed the serpent and, at the intermediate level, the Five Senses –presented by the animals carried by some of the characters– welcome Hercules liberating.