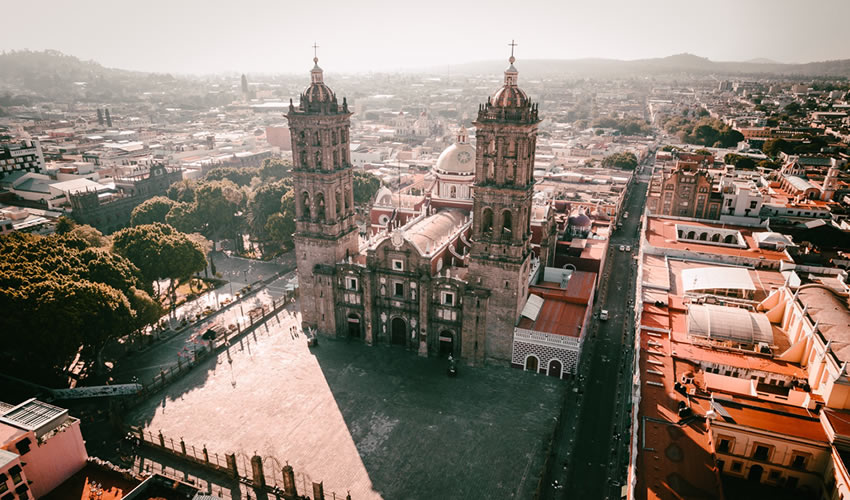 Puebla is the Heritage of Mexico

The Puebla valley is guarded by the Popocatépetl and Iztaccíhuatl volcanoes, from the northern highlands with its mist and color environment to the south in the Tehuacán-Cuicatlán valley with its landscapes full of cacti.

Meanwhile, the Historic Center of Puebla, built with domes, towers, bells, Talavera, brick, and white mortar, has been declared a “Cultural Heritage of Humanity” by UNESCO since 1987.

For this and more, Puebla City is the best option for your next trip.

Puebla witnessed four important events in the history of Mexico. For this reason, the State Congress awarded the state capital as “Four Times Heroic” in 2013.

Battle of May 5th – The first heroic event in Mexico took place in Puebla City: The battle of May 5th “(Batalla del 5 de mayo”) in 1862, the Forts of Guadalupe and Loreto.

Siege of Puebla City – The Siege of Puebla was a military action of resistance of the Army of the East. Jesús González Ortega led the movement against the French forces. It lasted 62 days, from March 16th to May 17th, 1863.

Although the Mexican army was defeated, their effort and bravery were recognized as heroic.

The capture of Puebla City – Also known as the Battle of April 2nd (“La Batalla del 2 de Abril”), 1867, the capture of Puebla consisted of the defense of the city of Puebla, by the Mexican Army under the command of the general Porfirio Díaz against the imperialist troops.

This confrontation represented another national victory for the republican government.

Mexican Revolution – The beginning of the Mexican Revolution took place in Puebla with the Serdán Alatriste brothers; Áquiles, Máximo, Carmen, and Natalia Serdán who supported the ideas of Francisco I. Madero against the reelection of Porfirio Díaz.

The attack on the Serdán brothers on November 18th, 1910, made them the first martyrs of the movement. This event accelerated social justice in Mexico.