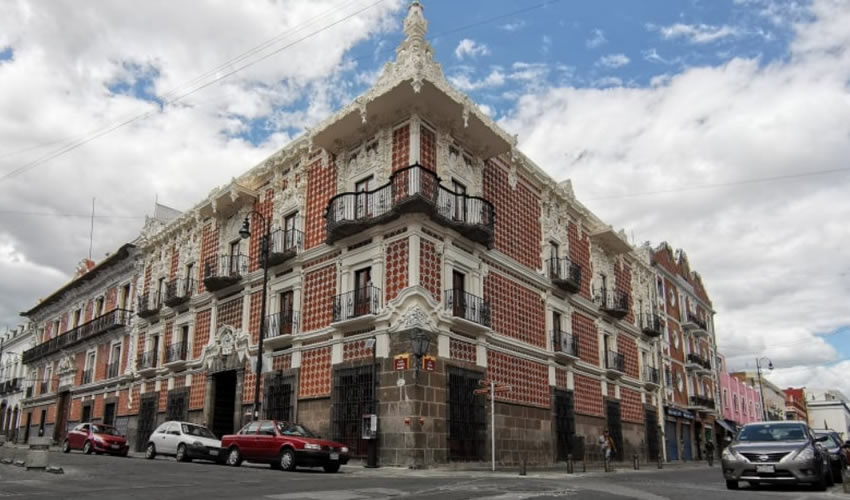 It is located at Calle 4 Oriente 416 (number 16 of the old Raboso Street), on the corner of Calle 6 Norte (formerly, Calle de Chito Cohetero), in the Historic Center of Puebla.

According to popular legend, the property was built as a wedding gift for a bride who had asked for “a house looking like a candy”. Alfeñique is a type of candy from Spain, common in Mexico during colonial times.

The construction dates from the 18th century and is the work of Antonio de Santa María Incháurregui, who used mortar, petatillo, and maiolica (tin-glazed pottery). The first owner was Juan Ignacio Morales, blacksmith master, and grandfather of the Atlixquean painter Francisco Morales Van den Eyden.

The historian Hugo Leicht mentions that the house has been cited with its current name since 1790.

After being owned by various characters such as the landowner and rancher Alonso Rodríguez Cano, in 1890 the Casa de Alfeñique was added to the patrimony of the private charity Monte de Piedad Vidal Ruiz. In 1896, the Monte de Piedad Ruiz y Vidal ceded the property to the State Public Charity.

In 1926, the Regional Museum was installed there during the administration of Governor Claudio N. Tirado (1925-1926).

In its three levels, the museum houses works of art and representative objects of the history of Puebla throughout its history. In addition to the rooms dedicated to exhibiting its permanent collection, it also has spaces for temporary exhibitions, an art gallery, and an area for presentations and conferences.

The historian Enrique Juan Palacios wrote about the property in 1916, highlighting its Arabic-style ornamentation and Churrigueresque-style ornaments.

The house is also described as “a definitive expression of colonial art and a lot of perfectly stereotyped Creole art.” On the inside of the house, Manuel Toussaint emphasizes that “the staircase is very remarkable; it is crowned by a dome that presents a magnificent appearance on the inside”.

The style of this property testifies to the artistic taste that prevailed in its construction period, where the baroque had an important place in Puebla society.

On July 5, 2016, the state government awarded a remodeling contract to a construction company for the amount of 9 million 771 thousand 233 pesos. The total cost of the remodeling was close to 15.3 million since 9.8 million were allocated to the work and 5.5 million to the curatorship.

The changes to the Casa de Alfeñique were criticized for removing a room on the ground floor to make way for a private cafeteria, relocating the Quauhquechollan Codex to the Regional Museum of Cholula, or the disappearance of the art gallery, among others.

As a result of the earthquake of September 19, 2017, the property was severely affected, so the state government ordered the removal of the more than 900 works of art that the museum housed and safeguarded them in the vaults of the International Baroque Museum.

On September 24, it was announced that the National Institute of Anthropology and History (INAH) would be in charge of repairing the damage caused by the earthquake.

Although reconstruction work began in October 2017,13 a subsequent earthquake, which occurred on February 16, 2018, caused further damage to the building.

Initially, it was estimated that the repairs would be completed in April 2018,15 however, on June 7, the mayor of Puebla, Luis Banck Serrato, announced that the works were halted due to a lack of federal resources.

On July 10, Governor Antonio Gali Fayad indicated that the reconstruction of the museum is progressing, thanks to an investment of 34 million pesos by the Natural Disaster Fund (Fonden) and the Contribution Fund for the Strengthening of Entities Federativas (FAFEF) and that the Casa de Alfeñique would reopen its doors to the public no later than October 2018.